SCRANTON -- A controversial case involving a man and his dogs was back in court in Lackawanna County on Friday.

Tanis was arrested on animal cruelty charges back in 2013. Since then, an animal rights group called Tracey's Hope has provided foster homes for a total of 30 of Tanis' dogs.

Friday morning, we learned that some of those dogs can now be put up for adoption.

Tanis was not in court on Friday. His attorney argued on his behalf that Tanis should keep ownership of all of his dogs, even though he can't have them during the five years he's on parole.

Animal rights activists showed up to court to protests Tanis' efforts to keep his dogs. Some of these protestors have been caring for the dogs for three years.

A judge sided with them, ruling that the five dogs involved in Tanis' criminal case can now be put up for adoption.

"It's a very, very important relationship. Tracey's Hope, as you know, is founded on the principles of care and proper care of animals. They have vetted these foster homes. These dogs are in proper homes now and being properly cared for," said Paul Kelly, attorney for Tracey's Hope

The judge couldn't rule on the remaining 25 dogs just yet. There will be another hearing to decide if those dogs can also be adopted. They'll remain in foster care for now. 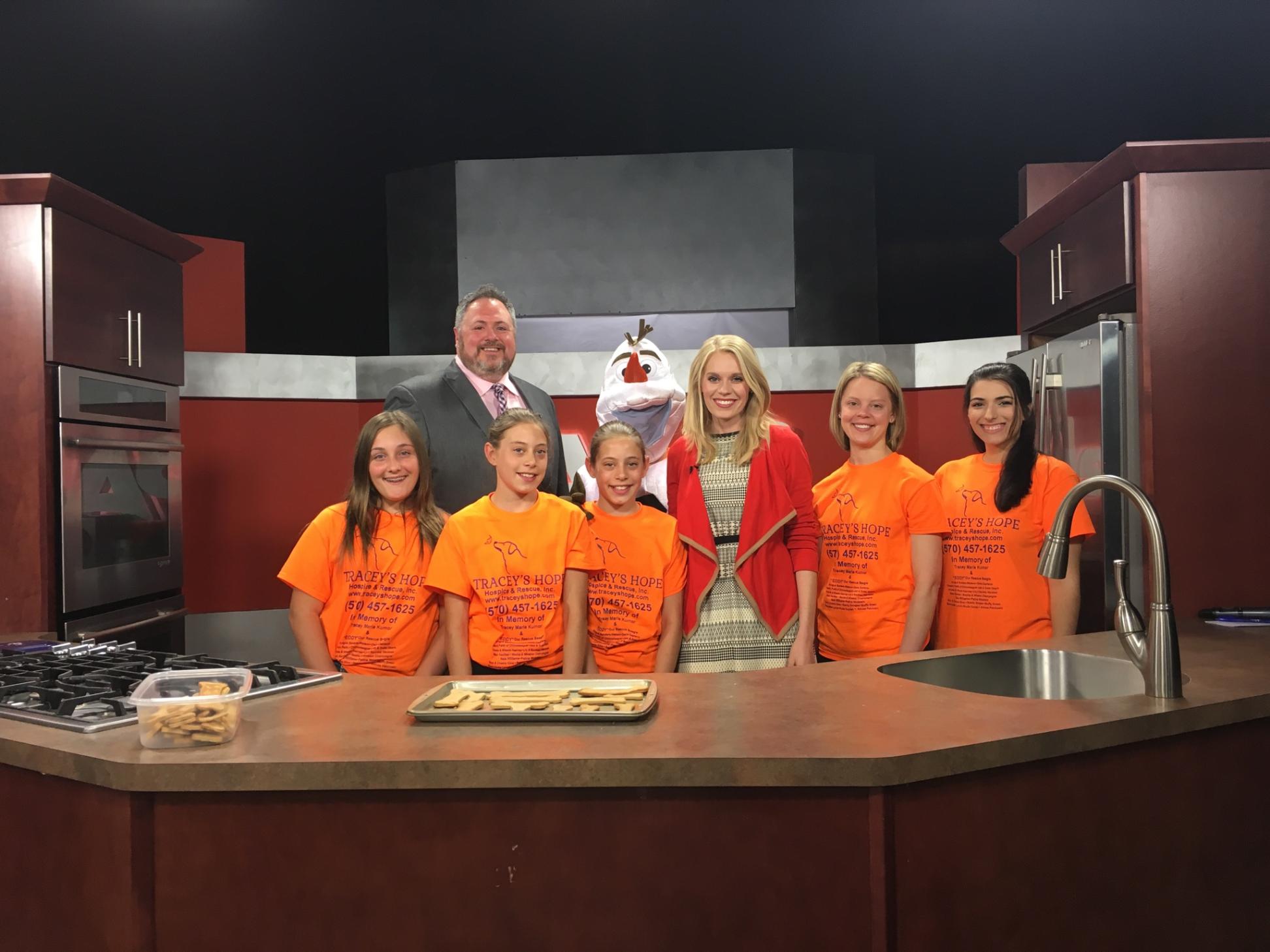 OFTEN IN THE KITCHEN, WE TALK ABOUT DELICIOUS TREATS FOR HUMANS. BUT TODAY - WE'RE GIVING OUR FURRY FRIENDS SOME LOVE TOO. WE'RE JOINED BY NINA CAPITANO AND SOME VOLUNTEERS FROM TRACEY'S HOPE IN THE KITCHEN TODAY... WHO ARE BAKING COOKIES FOR DOGS... AND TALKING ABOUT AN UPCOMING EVENT.

By Mark Hiller
Published 08/15 2015 11:15PM
Moosic, Lackawanna County -- Meet the happy couple -- canine couple that is. Larry, a male Weimaraner dog, is 3-years-old. He's engaged to Morgan -- a 7-year-old Newfoundland breed. Given the age gap, that makes this female canine a cougar. "She loves Larry, said Denise Kumor who is the CEO of Tracey's Hope Hospice Care and Animal Rescue.

The organization hosted an engagement party on Saturday for the pair of pets inside PetValu at The Shoppes at Montage in Moosic. "It's really all about the dogs and some people may laugh but the people that come in here are dog people. They don't care. They think it's great," said store manager Autumn Kemler.

The tongue-in-cheek engagement party was an important fundraiser for Tracey's Hope.
In its more than decade-long existence, the group's biggest animal rescue to date centered on the John Tanis dog abuse case in Moosic. Tracey's Hope had to provide foster homes and emergency care for 30 dogs -- including Larry who was found emaciated. His and the other dogs' futures are still being decided by the courts while Tanis, who was convicted last December, is serving a one to two year prison sentence. "It's not easy. When we took these 30 dogs it was not smooth sailing at all," said Ms. Kumor. "It's an emotional hit, it's a financial hit."

Nicole O'Malley of Madison Township brought her children Aidan and Mackenzie to the fundraiser. "Helping an animal rescue group is important because animals can't stick up for themselves. So, if we don't stick up for them and help them out, who will?"

While Larry is still in limbo while in foster care, his furry fiancee has a forever home. She was also a rescue. "Morgan definitely experienced worse as did Larry with the awful mistreatment that Larry went through," said Morgan's owner Fran Wiernusz of Old Forge. "Now, hopefully it's just happier days for them."

The wedding of Larry and Morgan is scheduled for August 29th at 10 a.m. at McDade Park in Scranton.

When Denise Kumor first met the Weimaraner she later dubbed Larry, she could see every one of his ribs through the skin of his undernourished body.

“Larry was the sickest of all,” Kumor said. “He was dehydrated, he was emaciated ... he had worms, parasites, you name it.”

Now, more than two years after Larry, four other Weimaraners and several Labrador retrievers were rescued from the Moosic home of John Tanis, the dogs are happy, healthy and ready to meet the public. 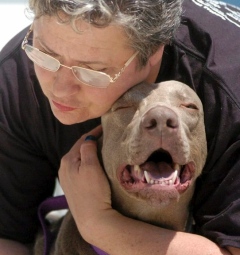 Tracey’s Hope, a rescue, shelter and hospice care program based in Duryea, will host a meet-and-greet event at Gracie Lyn’s Grooming House on Stephenson Street in Duryea today. The event coincides with the grand opening of Sharp Dressed Dog pet store and the grooming business’s fifth anniversary.

Kumor, chief executive director of Tracey’s Hope, and other foster pet parents will bring the dogs to the event for a reunion and, Kumor said, to show off how much the dogs have recovered since their rescue.

“They have all come a long way, really,” Kumor said. “We’re excited.”

Larry and Jimmy, another Weimaraner, romped on the patio outside Kumor’s Duryea home Thursday afternoon, pulling at their leashes as their silver coats gleamed in the sunshine. 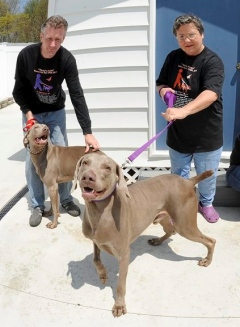 Next to an enlarged photograph of his former, emaciated self, Larry appeared strong and well-fed.

He scrambled up and down the steps of Kumor’s porch, his tail wagging and nose twitching as he took in the sights and smells of the day.

Tanis, 66, of Moosic, received a two-year prison sentence in February after a jury convicted him of five misdemeanor counts of animal cruelty. During sentencing, Lackawanna County Judge Vito P. Geroulo ordered the forfeiture of the five Weimaraners at the center of the case.

“We are petitioning the court for forfeiture of the remaining dogs,” Kumor said.

One of those remaining dogs is Michael, a Labrador retriever in the foster care of Kim Courtney of Moosic.

“When I got him he was small, he was a tiny, little, pudgy puppy,” Courtney said. “He’s very affectionate. He’s just a very loving dog.” 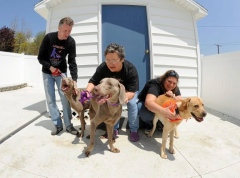 Tracey’s Hope volunteers and foster parents will be at Gracie Lyn’s from 9 a.m. until 4 p.m. on Saturday. There will be refreshments and raffles, Kumor said, and anyone who brings a donation of dog food, treats or cleaning supplies for Tracey’s Hope will be entered to win an overnight package from Mohegan Sun Pocono including dinner for two at Timbers Buffet and $50 free slot play.

Bringing the Animal Abuse Stories of Luzerne and Lackawanna Counties to Harrisburg....

Animal Rights Team Coordinator for Tracey's Hope, Inc. "A Voice for Those who Cannot Speak"